Than Sadet literally means ‘royal river’. The area was given this name in honour of King Rama V who visited the area several times during his reign. It is customary to also call the beach Than Sadet although perhaps more accurately it should be called ‘Haad Than Sadet’.

Despite its beautiful beach and royal connections, Than Sadet has resisted becoming a major tourist attraction on the island. This is because of the difficulty of reaching the beach, and because it is a small beach owned by local families who have kept to the simple formula of catering to backpackers with basic Thai style bungalows.

Things are slowly changing. The road from Ban Tai to Thong Nai Pan has been paved and now work is starting on improving the road to Than Sadet. At present the island’s electricity supply doesn’t reach the beach resorts at Haad Than Sadet. Instead, electricity comes from generators that are switched off in the evening. No doubt over the next few years this will change. 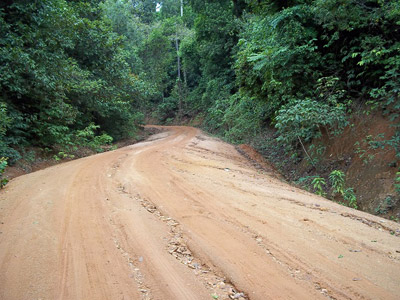 
Than Sadet is a village, beach and large national park that stretches over a wide area. It is free to enter the park. The park is famous for its waterfall course that was a favourite spot of King Rama V. He signed his name on one of the rocks. Subsequently two other Kings of Thailand, including the present King Rama IX, have added their signatures.

The picture shown below was taken in July when the water levels are at their lowest. The best time to visit Than Sadet waterfall is between December and February. 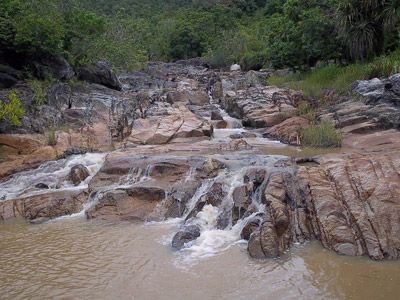 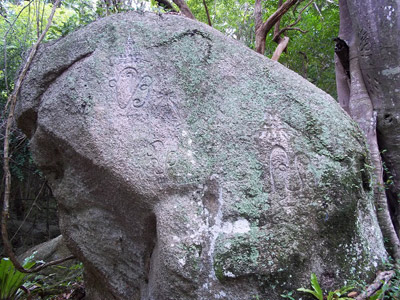 Accommodation in Than Sadet


There are a couple of bungalow outfits to stay at on the beach. The most popular is Mai Pen Rai Bungalows. They are located right on the beach front. These beachfront bungalows cost between 1,000 THB and 1,300 THB a night depending on the season. They come with fans and are beautifully built using natural materials. Some are built around the large granite boulders which are a feature of North East Koh Phangan. Bear in mind that all electricity in Than Sadet comes from a generator, which is switched on only between 11am and 4pm and 6pm and midnight.

Mai Pen Rai Bungalows also has a beach restaurant. The food is good, particularly the Western dishes with a French co-owner overseeing the kitchen.

At the opposite end of the beach to Mai Pen Rai bungalows there is a cluster of small restaurants and bungalow resorts clinging precariously to the steep headland. 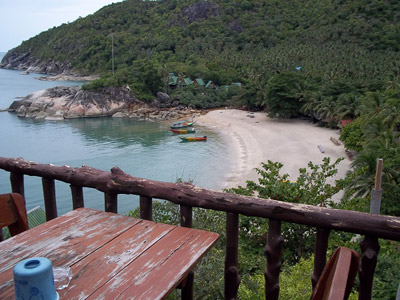 The climb to the top of the headland is by concrete steps pinned into the granite rock face. It’s not far, but it is steep. It is worth making the effort as the view from the headland is magnificent. The picture is taken from the restaurant at Silver Cliff Bungalows, where small bungalows with an equally good view are available for 400 to 500 THB a night. You can't book these bungalows online, only by telephone a few days in advance. This said they are rarely full, and there are plenty of other places to choose from, so if you want to stay perhaps it’s less hassle to sort it out when you get there. Bon chance!
Posted by Best Beaches at 05:23 No comments:

East Coast About to Open Up 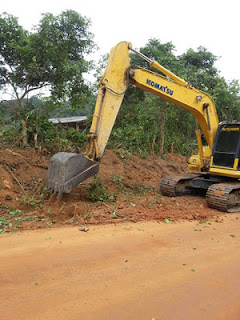 In June 2013 work began on the small stretch of road just before Than Sadet that remained dirt track. When it is completed (due 1st October) it will open up the east coast of Koh Phangan to further tourist development.

At present it is only the Thong Nai Pan area that has luxury hotels and a mass tourist appeal. However, this situation could all change within a few years. The west and south coasts suffer from large tidal differences. In the high season of July and August the sea recedes a long way at low tide. It means people have to walk 1 km out to be able to swim. Although beaches like Haad Salad and Haad Yao on the west coast have coral reefs and diving and snorkelling opportunities, for those just wanting a swim these beaches are far from ideal. The best swimming beaches are definitely on the east coast in places like Thong Nai Pan, Than Sadet, Haad Nam Tok, Haad Thian and Haad Yao East. It is these pristine beaches with great swimming conditions that developers will be looking to build hotels and luxury resorts on.

Koh Phangan Airport is under construction and due to be finished in late 2013 or early 2014. With a good road linking the airport to the east coast beaches it is only a matter of time before people stop looking at Ban Tai and Haad Rin and start casting their attention to the eastern beaches.

In Snowdonia in Wales high gates have been placed in the park that are commonly referred to as ‘granny stops’. They are designed to deter the masses from over-running the national park. Only the better and fitter climbers and walkers make it over the high gates to enjoy certain parts of the park. This is to protect the environment.

The bad condition of the Ban Tai to Thong Nai Pan Road was in effect a ‘granny stop’ that held in check mass tourism and large scale development projects. When the 3.75 km part of the road is paved the granny stop will be removed and more people will start to explore the beautiful east coast.

The least well known beaches in Koh Phangan are set, in a few years, to become the best known. That is ‘progress’.
Posted by Best Beaches at 13:55 No comments: